On 24 February 2022, Russia launched an invasion of Ukraine, after months of posturing and mobilizing troops and weapons at the Ukrainian border.

Since then, we are constantly in touch with our local Ukrainian colleagues who refuse to flee their country or homes.

Let`s not forget Marcus Ryder’s tweet paying tribute to journalist Oleksandra Kuvshynova, who was killed on 14 March near Kyiv while working with a Fox News team to cover Russia’s invasion of Ukraine.

Because many aren’t aware of the important role fixers play in international journalism and filmmaking, we decided to interview Albert, part of our Ukrainian crew.

We have many reasons to be intensely grateful to fixers like him.

How did you get in the industry and how did you become a producer?

It all started with the revolution and the Russia-Ukraine war. I always wanted to work in the film industry, but before Euromaidan 2014 I had little to no connection to it. There I had the chance to meet my future partner, Anastasia, who is a brilliant, award-winning documentary photographer, and a group of young Ukrainian filmmakers I started to work with later. After the end of the protests, I joined the army to help fight the first Russian invasion at Donbas, where I spent two years. By the time of my resignation I had a ton of useful military and civilian contacts, as well as conflict zone experience, so with the help and mentoring of my partner I started to produce frontline stories for international media. Then my skills proved to be useful for documentary filmmaking as well, so it became my main job for the next years. Currently I’m getting back to the army till the end of the war. What is interesting is that my last job before signing up for the army was one for Storytailors with a documentary filmmaker crew from Switzerland.

So many stupid things happened to me in these 6 years of work, like being arrested in the airport in Iraq during a shoot, or being arrested 13 times during a 3-day shoot in Donbas and being shot there as well, also losing some important footage because of technical issues with the cameraman`s memory card. It took one day and huge help from friends to get out of prison in the first case and having backup documents and also understanding the security rules in the second. The footage problem was solved thanks to a good friend of mine who was also filming the same speech as my team did, so he was able to help me with that piece of material. By the way, none of this happened with the Storytailors assignments.😊

Anyway, it`s all about staying calm and knowing how to react in unpredictable situations. And trying everything out, even the craziest solutions work sometimes in very specific situations.

What kind of mindset is required for this role?

The most important aspect of our job involves good communication skills. For example, what I enjoy most is talking to people and hearing their stories. You need to insist and find another way if something goes wrong, to be able to improvise and always be the calmest person on the crew no matter what.

I think that depends on the type of job we do. Sometimes you need to be an actual co-author of the story, especially when the story depends on your understanding of the issue and your network of contacts. But sometimes you work with people who are really involved in the topic, who know exactly what they want and in this case you just need to provide them with everything they need for the work to go smooth. I think both options are fun in their own ways, but the first one is much more complicated.

I really enjoy Storytailors` established workflow and professional attitude. It can sound basic, but this thing is not actually so common in my field. The only downside I can think about is having to use the designated Storytailors email – it works fine, but I’m too attached to my personal one and I love to have all my things in one place 🙂 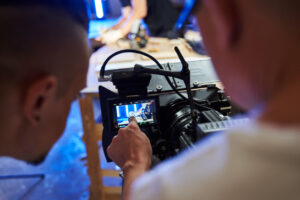 2022 in Review – How to Film Anywhere, from Iceland to New Caledonia 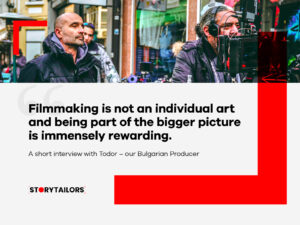 Storytelling, finding your own voice and embracing change